Let's make this quick so we can get down to business:

Tiffany Reisz, from her bio:

Tiffany Reisz is the author of the internationally bestselling and award-winning Original Sinners series. Tiffany's books inhabit a sexy shadowy world where romance, erotica and literature meet and do immoral and possibly illegal things to each other. She describes her genre as "literary friction," a term she stole from her main character, who gets in trouble almost as often as the author herself. She lives in Lexington, Kentucky with her husband, author Andrew Shaffer, and two cats. If she couldn't write, she would die.

The aforementioned Andrew Shaffer, from his bio:

Andrew Shaffer is the New York Times bestselling author of the essential survival guide, How to Survive a Sharknado and Other Unnatural Disasters, and the Goodreads Choice semifinalist Fifty Shames of Earl Grey. His most recent books are Ghosts from Our Past: Both Literally and Figuratively: The Study of the Paranormal, a tie-in to the 2016 Ghostbusters film, and The Day of the Donald: Trump Trumps America. His next book, Ain’t Got Time to Bleed: Realistic Medical Reports on Hollywood’s Greatest Action Heroes, will be released in November 2017. He also runs the publishing outfit 8th Circle Press with his wife.

And with that, on to the interview.

To conduct this email, I sent the questions to manservant@TiffanyReisz.com and Andrew responded. Andrew, do you have “manservant” on your business card? Tiffany, do you have any manservant intern programs available?

Andrew: I don’t have business cards. I usually write my name on a scrap of paper and tell people to Google me, because I’m not difficult to find online. That makes me sound like a world-class narcissist, but I’m really just frugal.

Tiffany: Alas, the manservant position is currently filled and we are not taking applications. I could use a cabana boy, however. And also, a cabana.

How are your writing processes similar and how are they different?

Tiffany: Andrew tends to get writing jobs that are very collaborative. Like with How to Survive a Sharknado, he had to work closely with people at the SyFy channel. I’m all on my own for my books. I run an idea by my editor. She gives me the thumb’s up. I write the book and when it’s done my editor reads it and gives me her thoughts. It’s much quicker than Andrew’s process where he has to go back and forth and back and forth with editors and the people who guard whatever intellectual property he’s working on.

Andrew: Other than that, the day-to-day process is much the same—sit down and write until we hit our wordcount for the day. Tiffany writes in her office, whereas I write at coffee shops. There’s less chance of me napping all day if I’m out in public. Plus, people are endlessly fascinating. I love eavesdropping and observing.

This year you two have started a press titled 8th Circle Press. How did you come up with the name and why did you start the press, as both of you are prolific writers getting published by established large presses?

Tiffany: The 8th Circle is the name of the kinky club my characters hang out at in The Original Sinners

series. I said a long time ago that would be the name of my private publishing house. And we already had the logo, the cute little eight inside a circle.

My Original Sinners series ended after eight books, which was always my intention and my publisher’s intention. Alas, readers were not thrilled the series was over, and I admit I missed writing my Sinners, too. So we set up a little self-publishing outfit so I could continue to give readers Original Sinners and Original Sinners-adjacent books.

The Red, out July 11th, is a book that was born in the Original Sinners series. It was a book supposedly written by my main character, Mistress Nora. Readers wanted to read one of her books so…I wrote it! And it is filthy with a capital FILTH.

I am working on a novel titled The Haunting of the Paranormal Awards that is basically what would happen if you two wrote a book together and then Brian Keene edited it. Can you give me some tips? What needs to be in a novel about romance novelists fighting demonic spirits? I also have a possessed Fabio. What are some tropes and ridiculous things that you think need to happen in this novel?

Andrew: Romance novelists have to fight against institutionalized sexism in the publishing world, where romance doesn’t get the same respect as male-dominated genres. Fighting demonic spirits should be a piece of cake.

Tiffany: I love Zach too! He’s probably the one guy in the book I could have a real relationship with. My other men are too complicated. I just want a nerd who loves books as much as I do. As for other characters, I love, well, all of them. Mistress Nora is as fun to write as Kingsley but for different reasons. A scene immediately gets more tense and dramatic the second Søren walks in the door being all blond and dark and deep and serious and priestly. The sweetness of Michael and Griffin together is a balm to my writing soul. They’re all my favorites.

Will you two ever try writing a novel together, and could it be about S&M-loving sharks? 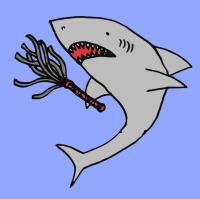 Tiffany: If we ever did write a book together it would probably be a kids’ book or a baseball romance. But the baseball team could be called The Sharks and it’s possible one of the characters is into S&M…

My fiancé Leza and I are editors and freelance writers as well. When we both have deadlines coming up, our home turns to total chaos. Do you have system to keep things in order when you are both facing pressing deadlines, like does Andrew do the dishes while Tiffany cleans Honeytoast’s cat litter, or vice versa?

Andrew: Wait, I’m supposed to be emptying the litter box?

Speaking of Honeytoast, my cat Khadija is very jealous of Honeytoast’s fan base on Twitter and Instagram. If Honeytoast could write one tweet, what would she say?

Tiffany: Honeytoast would probably do a Twitter quiz and the question would be, “Why am I sad?” and all four answers would be “Buckley Cat.”

Andrew: Buckley is our twenty-pound orange tabby. He’s mean. We used to call him the “Bad Orange Man.” Now we reserve that title for the man in the White House.

Leza and I do content and line editing for each other’s work before we send it over to editors. Do you two do anything like that, or act as each other’s beta readers?

Tiffany: We do when we have time. Andrew’s the best at catching plot holes. None of my other beta readers catch the same mistakes he does. I’m good at doing punch-up on Andrew’s books. I’m good at funny dialogue and adding jokes, etc. But sometimes we’re so busy with our own books we don’t have time for each other’s. Can you imagine if we were both accountants and how awful it would be if we made each other look over random tax forms? I would die.

Andrew: I line-edit all of Tiffany’s 8th Circle Press books. When you add that to my other 8th Circle Press duties—layout, marketing, cover design—there’s just not much time to do content editing.

I still enjoy reading her work, though. I was a Tiffany Reisz fan before we hooked up—I’d read her first novella, Seven Day Loan, and given it high marks. Later that year, the magazine I was reviewing for assigned me her first novel, The Siren. I had to decline, because by that point I was sleeping with the author. I don’t professionally review books by authors I’ve seen in the nude. That’s my ethical line in the sand.

Respect, Andrew. What are each of you working on right now?

Andrew: I’ve been working on a top-secret project all summer. If I told you what it was, I’d have to kill you. And all your readers. The body count would be enormous, not to mention time-consuming. When you’re on deadline, there’s no time for murder most foul. 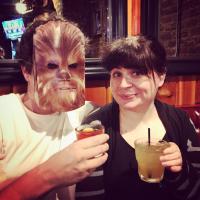 Scandalous! Is 50 Shades of Grey Better Than You Think It Is?

Fifty Shades of Inattention: An Open Letter To The Husbands and Boyfriends of America