Last Sunday former President Jimmy Carter spent a good part of the afternoon signing copies of his newest book, A Call to Action: Women, Religion, Violence, and Power, for 1600 fans at Powell's in Portland, OR. The Oregonian covered the story, making sure to point out the 89-year-old's energy and machine-like process when it comes to signing.

Many readers may have also noticed that Carter has written, by his own count, 28 books at this point. 28 is quite the hefty number, putting Carter just behind some of our more prolific authors. As full-length works go, Kurt Vonnegut edges Carter out by a slim margin. LitReactor favorite Chuck Palahniuk, who is known for his regular output, is still in Carter's shadow. During the time spanning Palahniuk's publication of Rant, Snuff and Pygmy, 2007-2009, Carter put out a total of five titles.

Just what lurks between those pages? What's Carter been up to since the publication of his first book, Why Not The Best, in 1976? Let's take a look at just a few of his offerings.

Jimmy Carter's book for kids has to be amongst the more bizarre offerings. The plotline involves a "crippled" boy befriending a sea monster. Best of all, you can watch him read it to a small group of children. Nothing like starting off a reading for kids by mentioning how you used to spend a lot of time in submarines. 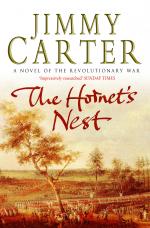 2.  The Hornet's Nest: A Novel Of The Revolutionary War

Interesting fact, although most Presidents dabble in the memoir game, this book of historical fiction is the first work of fiction ever published by a President of the United States. 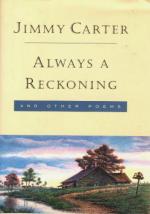 3.  Always A Reckoning and Other Poems

Take a shot at poetry? Might as well.  Here's a short one from this collection:

When I behold the charm
of evening skies, their lulling endurance;
the patterns of stars with names
of bears and dogs, a swan, a virgin;
other planets that the Voyager showed
were like and so unlike our own,
with all their diverse moons,
bright discs, weird rings, and cratered faces;
comets with their streaming tails
bent by pressure from our sun;
the skyscape of our Milky Way
holding in its shimmering disc
an infinity of suns
(or say a thousand billion);
knowing there are holes of darkness
gulping mass and even light,
knowing that this galaxy of ours
is one of multitudes
in what we call the heavens,
it troubles me. It troubles me.

You can read a pretty painful New York Times review of the collection here. 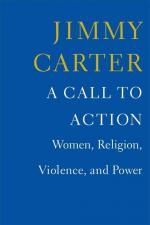 4.  A Call to Action: Women, Religion, Violence, and Power

Carter's most recent, a book that some are calling his most important, and the one that had 1600 fans lined up at Powell's, tackles issues of women's rights from several different angles, some quite unexpected.

Anyone read anything by our prolific ex-president?

Dwayne from Cincinnati, Ohio (suburbs) is reading books that rotate to often to keep this updated April 3, 2014 - 7:34pm

Well he is the coolest ex president.