Every year Amazon.com has to re-negotiate sales terms with publishers, and things have gotten ugly from time to time. In the past, Amazon removed "buy" buttons from titles published by Macmillan over an eBook pricing scuffle. Independent Publishing Group saw some of their books removed from the site entirely during some intense negotiations.

This year the big flare-up is between Amazon.com and Hachette, publisher of authors such as Malcolm Gladwell, Stephen Colbert, Sherman Alexie, and some of J.D. Salinger's works. Hachette claims that Amazon is applying some pressure in order to get the publisher to agree to certain, unspecified sales terms. Tactics include keeping small amounts of Hachette books on hand so they must be re-ordered, which turns the normal 3-day shipping into a 2-week affair. Hachette also claims that Amazon is removing the publisher's titles from their buyer recommendations. So when you see the "Customers Also Bought..." listings, don't expect to see Catcher In The Rye. Not to mention price hikes. Amazon's normally cheap prices are being outstripped by competitors, at least when we're talking about Hachette books.

And check this out. Here's a screen shot of what happens when you look up Jeffrey Deaver's The Skin Collector, an offering from Hachette: 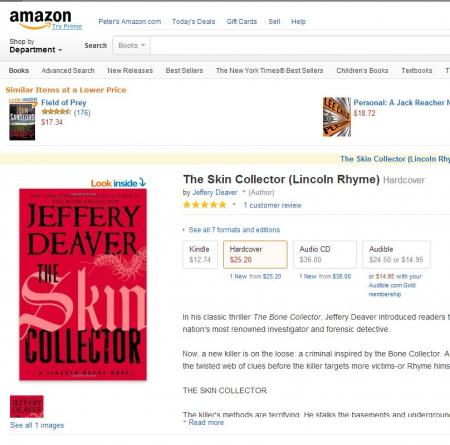 Notice the "Similar Items at a Lower Price" banner at the top, just above the yellow line.

What happens if I select Personal: a Jack Reacher Novel from that list? 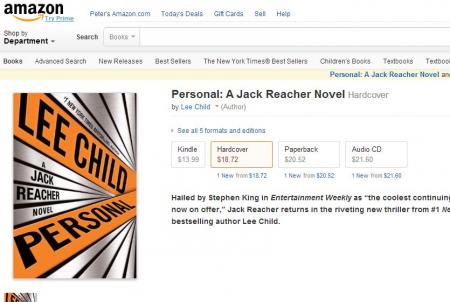 Notice how there's no banner above the line this time. Another tactic to drive traffic away from a Hachette title.

Well, it's legal. In essence, as long as Amazon isn't working with other companies and as long as their actions are designed to reduce prices for consumers, most anti-trust laws don't really apply.

But again, is this right?

In the battle over lower prices for consumers and publisher rights, we'd also do well to remember that many authors may find themselves damaged in the cross-fire. A Hachette author with no stake in the negotiations might find her book removed from recommendations and unavailable for purchase, or available with a delay not found in other stores.

What do you think? Is Amazon right for seeking the lowest price for consumers? Are publishers right to hold on to their ever-shrinking raft of rights and negotiation points?

Can't Everyone In The Publishing Industry Just Get Along?

My feelings are mixed here. Certainly as a consumer I love buying used books that range from 2.35 to .01 plus shipping. However as an author I honestly think a price of a unused book that's $8.00 is dirt cheap.

I will never buy a book for $14.00 no matter how good of a bestseller. Though a lot of willingness to purchase is outside of the authors control. Such as "does this book have a topic or theme that goes well with another book?" or "I only have fifty bucks, I'm not paying $12 for this book."

Of course this is also why reviews like, "this book was $12.00, I wanted to buy a $6.00 one." Don't really hold water. As an author I'd never approve of a $10 for a mass market paperback. And certainly not $16 dollars for a regular paperback.

I want them to be a cheap as possible, and still earn money on that book.

How amazing is it to be able to work anywhere, at any time, and know that there is a balance between business and personal life? It's all because to https://onlinefreelancejobs.net/matlab-job/. I've been working with these people for a long time and have never regretted it. Now that I am 25, I respect myself by being happy.