“Would you review my indie comic,” might be the scariest request a book reviewer gets. Comics are tough. Before you even think about matters of taste, there are the very basic questions about whether the book is read-able, whether the art is comprehensible, and whether the two can not only co-exist, but enhance each other. It’s like reviewing an art installation that boasts some visual art, some soundtrack, and a book of poems you’re meant to read in conjunction with certain pieces. You’ve got the individual parts to look at, plus the way the pieces function alongside each other, plus the way it all comes together as a whole. AND THEN, throw on top of that the fact that when it comes to comics, you’re reading issue #1 of something with parts to come, so it’s like you get to wander through part of the art installation one day, and then you have to assume what’s coming next.

I’m trying to help you understand why I was a little hesitant when it came to the first issue of Serious Creatures by Tony McMillen, and why I was so delighted to find what I did.

Serious Creatures’ first issue is about a young guy who travels to Martha’s Vineyard to check out the filming of a little movie called Jaws. Now, this was before Spielberg was Spielberg, and it was a little easier for randos to walk around and check out the action. Our hero makes his way to the special effects studio where he meets his hero, special effects wiz Jack Barber. The two nerd out about monsters and monster art.

That’s a very fast version, just to give you an idea of what we’re talking about. All the emotion and fun have been stripped out in this description, so keep that in mind.

I’m enjoying the writing. I’m using that tense, “enjoying” because this is an on-going thing, right?

The writing has a realistic sound to it, and though it goes between the abstract “life of the mind” portions and the concrete in-moment stuff, the balance is good. The relationship between the siblings feels real. You sort of bicker with your siblings all the time, probably because you can. It’s not like making friends at school where you have to be nice enough to stop repelling people. You’re stuck with each other! That’s how this feels. 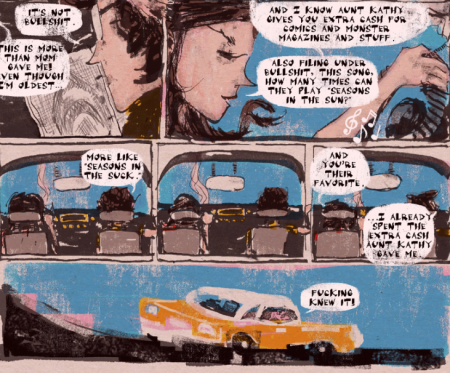 The writing makes nice use of the comics form, too. Comics can do something that other forms struggle with, which is swapping between inner and outer dialog in a seamless, simple way. 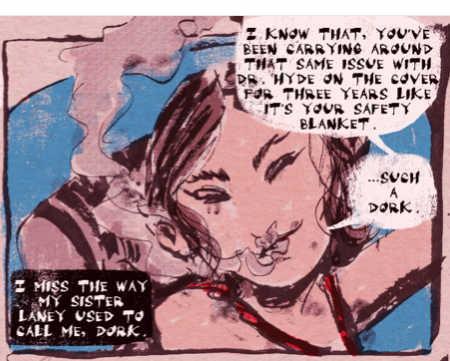 There’s never been a simpler way to switch from outer to inner than putting a box or cloud around one set of words, dialog balloons around another. It lets the reader switch seamlessly from a third-person to a first-person-ish (or, in some cases, a “close third”) perspective, something that comics are underrated for doing and that happens really nicely in this book. Comics that make good use of the options available to comics always get a little credit in my book.

Serious Creatures also plays with time. Some of the narration comes from a later-on version of our narrator, who we don’t really see. The adult Kevin Arnold being the closest equivalent. It almost never works in TV or movies, but it can really work in comics to bring out more story. The “I didn’t know it then, but now I know…” works better in comics than it does in a novel or on a screen.

The art might overshadow the writing a little, and that’s not because the writing is bad. The art is excellent. It’s a watercolor look, moody but also colorful. I’m not a total expert, but I think it’s the mixture of bright colors and thick, black lines that really bring the art to life and make it something unique. 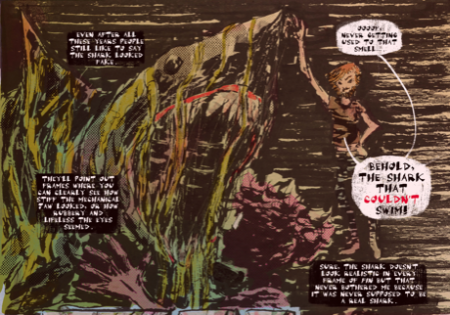 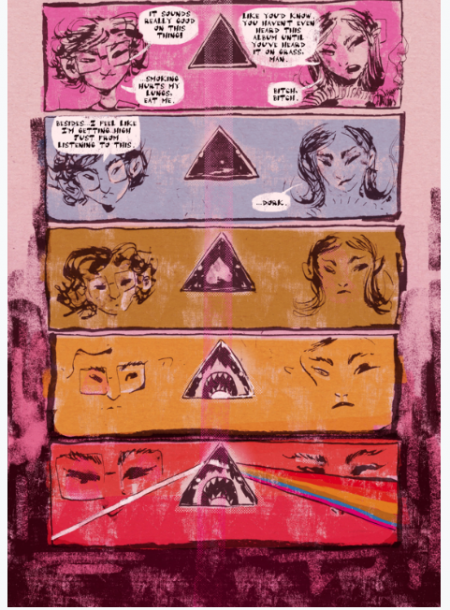 Sometimes indie comics struggle in finding a balance. They either look like beautiful art pieces that could go up on the wall, OR you can easily tell what the hell is going on. Sometimes, indie comics manage both, and that's the job, in my opinion, a job Tony McMillen manages and then some.

There’s also a great mix of layouts and word placement that give the reader some incentive to slow down and really appreciate what’s going on. You can zip through the book, but if you don’t, you’re rewarded by catching some of the little things, like glasses in place of comics panels. 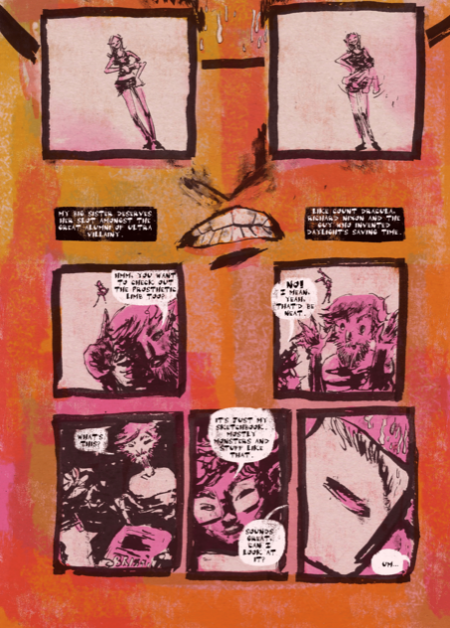 We’ve seen a lot of nostalgia pieces lately, especially focusing on the 1980s.

It’s getting a little old. Which I guess is the whole point of notalgia, that it’s old, but let’s not get caught up in semantics. There are some storytelling reasons that the 80s work really nicely (no internet, no cell phones), and there are some marketing reasons (the folks who are nostalgic for the 80s are in their prime spending years). The result, however, is that there’s a bunch of shit set in the past for no real reason. The story could take place in any time, which makes it feel like the setting is just a marketing move.

With Serious Creatures, the setting being the mid-70s gave me pause at first. When I’m seeing Pink Floyd and Jaws, I’m thinking, “Here we go.”

But what sets Serious Creatures apart is that it doesn’t stop with namedropping the most famous products of the era. The nostalgia is for creature effects from movies of the time, which is more niche, more interesting. By making the main source of the nostalgia less universal, it becomes more personal, which (weirdly) makes it feel more universal. Because while not everyone was a student of practical film effects and monster makeup the way our hero, Bobby, in Serious Creatures is, lots of us felt strongly about something in that teenage way. And that’s why you'll identify with the nostalgia in Serious Creatures. It’s not about the objects of nostalgia themselves (“Isn’t it cool that Back to the Future was new at one time?”), but the emotions we felt as young people. 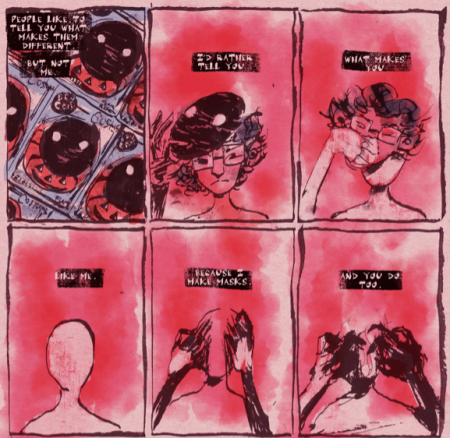 Serious Creatures connects those dots. It digs past "Remember that thing?" and into the place we really want to be: “Remember how that thing made you feel?”

The biggest thing in comics right now is not comics, it’s movies. A huge swath of the best characters are owned by Disney. The comics scene is looking a little…”by committee.”

However, that’s not necessarily a bad thing. If people aren’t concerning themselves with what’s happening in funnybooks, that gives funnybooks the freedom to do whatever they want. It means that indies can rise. They can be weird and niche. They don’t have to look, sound, or feel at all like their on-screen counterparts. If fewer people care about something, it's wide open for just about anybody to tell just about any kind of story they want.

Which is exactly how Serious Creatures operates.

Indie comics can have a moment right now, and I hope they do.

29 Binge-able Comics For Your Weekend