I'm here to talk about the utterly gripping and quite entertaining psychological thriller little threats by Emily Schultz. It’s by far my favorite read of the pandemic, a time period where I’ve found it hard to read much at all.

And it’s not that what I have read hasn’t been engaging, it's just that little threats is different. It’s a reminder of what reading a book can feel like when the author knows how to write great literature, tell taut stories, and create something that has the chance to be popular.

Such works are a mix of granular details and strong metaphors, language that is straight forward, chapters which are short and fast, driving you to the next page and the one after that. The dialogue pops and the characters are people we recognize as friends, family, neighbors and ourselves.

Writing like this is a gift that eludes so many, this author included.

Yet despite how glaring my shortcomings felt as I read little threats, I couldn’t put it down.

On the face of it, the book is centered around twin teenage sisters, Kennedy and Carter, and their past, the 1990s (and the attention to 90s details from the clothes, flannel, to the music, grunge, is just delicious), the men they were involved with—and do note they are men, not boys—the murder of their friend Haley, and Kennedy's subsequent jailing for the murder, despite having no memory of the night in question.

The monsters we fear, aren't monsters at all, not in the cinematic sense anyway, they’re not sociopathic serial killers or even strangers who lurk around corners, they're people we know.

little threats is also about Kennedy’s 2008 release into a world so very different from which she left. A world where music is downloaded, the presence of smart phones permeate our every moment, and where she is no longer a girl, but a woman who has to restart her life and untangle the ever present reverberations associated with a murder that may remain unsolved.

But it’s about more than that as well.

For many years I worked at Prevent Child Abuse America and spent countless hours trying to craft the most effective ways to write (and talk) about the work of prevention that would not only engage and educate the public, but move them to action. When the Jerry Sandusky story broke at Penn State I wrote about the case in a variety of ways, focusing on the roles of adults in the lives of children, recognizing signs of abuse, grooming, articulating the policies that needed to be enacted, identifying the groups who could offer support and guidance, and at some point my mother asked me as a former athlete whether any of my coaches had ever abused me in any way.

They hadn't, and I didn’t know of any cases where anyone I knew had been abused, but I wondered whether they existed. Especially in terms of the female athletes I grew up with. I contacted an old teammate I was close with back then and asked her if she remembered any stories like this. She laughed politely, of course she did, and went on to tell me about a young, though adult, assistant coach at our high school who I didn't know, who assaulted young women I did know.

Please note, my friend didn't actually describe these actions as assault, she described them as sex. They were assaults though.

Either way, I didn't know about it, it was a secret and I couldn’t have been more clueless.

I have found though over the subsequent years that most men and women my age, middle-age that is, know of stories like this. But they rarely think about them in terms of assault. It was a thing that happened and most seem to accept that’s the way it was when we were teenagers.

Their response is related to the reasons we tried so hard at Prevent Child Abuse America to educate the public about prevention. It's also about what we can bear as humans and how much we are able let ourselves absorb and accept as fact and reality.

Why is that important here?

Because thrillers count on all of these human traits and foibles to tell their stories. That there are always secrets and that people can find ways to justify some pretty horrible things. But they also test just how much the reader can bear. And what we experience in a book such as little threats, is that as we succumb to the story’s twists and turns, it turns out that we can bear quite a lot. 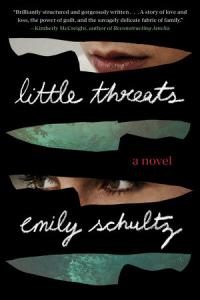 It's also important because of what little threats says about power, gender and both the interior, and exterior, lives of young women.

Which is to also say this.

I have a fifteen-year old son and at dinner the other night he told us how one of his best friends, a girl, who is also fifteen, is already being subjected to catcalls from men throughout the day and forced to rebut their efforts to engage her in conversations she does not want to have.

Which leads me to this, two moments late in my reading of little threats that continue to linger:

The first is a line following Kennedy's release where she and Carter are discussing men (page 306).

Carter says, "Do you remember when you were young and a boy could look at you and it was so overwhelming you thought you would die?"

To which Kennedy responds: "I never felt that way. I just assumed they would look at us."

The second line is from "A Conversation with Emily Schultz," at the end of the book, in which she says: "Like Kennedy, my first boyfriend was in his twenties when I was sixteen...It was a consensual relationship, but the power imbalance affected my confidence for years."

I share these lines because they represent another element of any good thriller. There has to be a predator unaffected by societal norms, cultural mores and what many of us consider decent.

These women, the characters in little threats, the author and most women we know, know this to be their daily reality, and in recognizing this, Schultz unwraps one of the greatest horrors of all, not to mention something I wrote about time and time again for Prevent Child Abuse America: the monsters we fear, aren't monsters at all, not in the cinematic sense anyway, they’re not sociopathic serial killers or even strangers who lurk around corners, they're people we know.

little threats is knowing in these ways, and all the ways that psychological thrillers work best when they work. They feel real, and what makes little threats so good is all of that is in the hands of a terrific storyteller who lets what we already know about the world slowly unfold, luring us in until we can’t bear to know what comes next even as we know the reality of it all too well.

Get little threats at Bookshop or Amazon

Bookshots: 'The Blondes' by Emily Schultz

Bookshots: 'Ill Will' By Dan Chaon

Writer's Tilt: What It Is and How to Avoid It