I’ll start this review by telling you straightaway that the less you know about Stephen Graham Jones’s The Only Good Indians, the better. Most, if not all of us in the horror community (and even beyond that too) know who Jones is, and know what to expect from him at this point, and I would highly recommend reading this novel on name recognition alone. (If you don’t know who he is, get to know him here.) His publisher for Good Indians, Saga Press—an imprint of Simon and Schuster—seems to agree that walking into this book blind is the best way to go. Here’s their blurb:

Seamlessly blending classic horror and a dramatic narrative with sharp social commentary, The Only Good Indians follows four American Indian men after a disturbing event from their youth puts them in a desperate struggle for their lives. Tracked by an entity bent on revenge, these childhood friends are helpless as the culture and traditions they left behind catch up to them in a violent, vengeful way.

...that’s the power of Jones’s writing, his ability to keep you reading even when parts inside scream at you to stop.

I’ll only add to this that Good Indians owes much of its plot, at least in a loose sense, to A Nightmare On Elm Street, but with splashes of graphic violence inspired by Tom Savini’s gnarliest Friday The 13th effects, all bound together with the heart and drama of Chris Eyre’s Skins, a film that, just like Jones’s novels, grapples with what it means to be a “good Indian”—as well as, in Jones’s case, a play on that stalwart bit of hate speech, “The only good Indian is a dead Indian,” a phrase that one of the characters, Denorah, briefly examines, ultimately proclaiming that if the saying is true, “she’s going to be the worst Indian ever.”

So what does it mean to be a “good Indian,” at least according to the characters in Good Indians? Is it staying on the rez, and thus staying true—ostensibly, at least—to your Native roots? Should one be loyal only to one’s tribe, and suspicious of any others, as in the mild, sometimes-only-half-serious feud between Blackfeet and Crows depicted in the book? Is it less about one’s heritage and more about being the best person you can be, regardless of tribe and location in the world, i.e., those that leave the rez for the world beyond? Is it simply enough to survive, as Denorah swears to do when she turns that old bigoted saying on its head?

As one might expect, there isn’t one definitive answer presented, though in general, it seems just trying one’s best and never crossing lines you cannot uncross is the core of Jones’s novel, a basic principle fueling everything that happens within its pages. It reminds me of a concept in Jewish teachings called kavanah. It’s defined by My Jewish Learning as such:

Kavanah is the Hebrew word for direction, intention, or purpose. In its simplest meaning, it refers to concentrating the mind in the performance of a religious act, ensuring that it doesn’t devolve into rote, mechanical action. 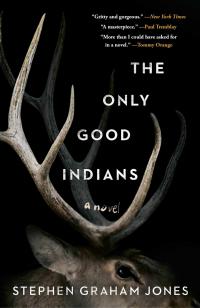 Kavanah differs from keva, or the “routine,” the means by which one performs a religious act. Several scholars argue that the keva isn’t as important as the kavanah, that one should attempt to practice Judaism properly, but so long as they’re doing the best they can, the intention behind their actions—the devotion to the ritual—far outweighs the technical accuracy of the ritual itself.

We see parallels to this idea throughout Good Indians, with perhaps the most potent example being Lewis and Cassidy separately worrying about the sweat lodges they’re building and whether or not how they use them will anger any cosmic “Indian police” forces. Ultimately, it seems doubtful that pouring some water for a dog or letting a woman into the sweat lodge will incur any sort of punishment. Rather, it is the transgression these men—alongside their friends Gabe and Ricky—committed ten years prior that will rain hell upon their heads. There are some things you just don’t do, some laws you just don’t break. The consequences are worse than you could ever imagine.

The Only Good Indians shows us just how awful those consequences can be, because they don’t just impact the guilty, but the innocent as well, a reality that manifests itself in utterly gruesome displays. I personally have a fairly strong stomach, but there were several moments I wanted to throw the book aside. I didn’t, though. And that’s the power of Jones’s writing, his ability to keep you reading even when parts inside scream at you to stop. It’s ultimately worth sticking it through to the end, as Jones gives his readers an utterly poignant climax and denouement, one that bridges considerations of the “Old Ways” and the ever-changing landscape of Indigenous people’s present and future.

Buy The Only Good Indians at Bookshop or Amazon

Thank you so much for this. I was into this issue and tired to   tinker around to check if its possible but couldnt get it done. N https://vidmate.onl/ ow that i have seen the way you did it, thanks guys
with
regards

By the way, it seems to me that it is mainly because of his Indian origin that Jones received flattering praise from critics in his address, and not because of any high level of writing skills. In any case, in "Only the good ..." I could not find it. Which is extremely regrettable, because I was hoping to immerse myself in a cool folk horror, but in the end I ended up with a ridiculous, stretched and poorly told horror movie, similar to a novelization of a cheap category B thriller, and not at all a quality mystical novel. I think I`ll wrire another review on this book in my blog Chatroulette español. The only good news is that now I won't even get a cannon shot at the prose of Stephen Graham Jones, which means I will save money to buy books that are more worthy and adequate in terms of storytelling.

Hello, my name is Ali Syed. I got scammed

Immediately, I contacted ULTIMATE HACKER JERRY & I trusted him because his reviews were from our local guild WILDER NEWTON. & within 4 hours of contacting him, I got all my funds back with an ROI. It was unbelievable. I must state, I had to send out my review also. He's indeed recommendable.

Contact Dr Ozigidon if you have been trying to conceive, I never thought I'd be writing this message but after 5 years of infertility and nearly lost my marriage due to not being able to have a child after suffering from PCOS and my TUBES ARE TIED, and severe endometriosis and scanning, I was told that IVF was the only option. This was something we could not afford and had almost given up hope of becoming a parent. A friend of mine recommended Dr Ozigidon to me and persuaded me to contact him, I finally contacted him and he made a spiritual breakthrough to get me pregnant with his powerful spell, within 2 weeks I was pregnant (naturally!!!) and my tube was untied as instructed by this powerful sorcerer. Now! I gave birth to healthy twins in February. I am writing this testimony for those women who are facing the same challenges or even more, depressed with no light at the end of the tunnel. Give Dr Ozigidon a try to help you solve your problem, and hopefully you'll have the same success that I have had. His email address (drozigidonhnez.spell.net@gmail.com) . Call or Whats-App him +2349054750112. I wish you all happiness in your marriages.