Picking up a Terry Pratchett novel is like self-administering a dose of anti-venom. His fantasy worlds contain the same toxins that inflame our reality: corruption, hypocrisy, greed. Yet within his narratives, as he rails against the too-familiar torments of racism, police brutality, environmental destruction, religious persecution, misogyny et al, he manages to lace the poison with enough humor, defiance, and faith in basic human decency for his stories to serve as a powerful antidote.

His most beloved characters – Sam Vimes, Granny Weatherwax, Tiffany Aching, Twoflower, Detritus, Susan Sto Helit, and Death – may command various forms of magic to deal with the chaos surrounding them, but their ultimate superpower is the possession of a kind, if muddled, heart and the desire to do the right thing. That’s what it truly takes to save the world. His gleeful romps through a land of dragons, trolls, wizards, and friendly werewolves (all perched on top of a disc balanced on the backs of four elephants as they ride a turtle flying through space) remind us we usually already have what we need to be heroes.

There will never be another new Pratchett book, so a meticulously-researched journey through the highs (and the odd low) of his long career is the next best thing. Marc Burrows’ affectionate yet clear-sighted biography includes enough new material to enthrall existing fans already entrenched in Discworld lore while offering a broad introduction to the man and his work for those less familiar with Ankh-Morpork’s odiferous back alleys. 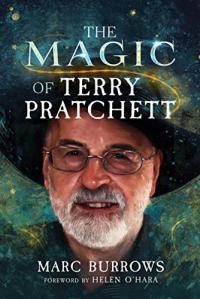 A self-confessed nerd, Pratchett was a bookish kid who parlayed his obsession with Tolkien into his own elaborate fantasy world. He published his first short story at 13, his first novel at 23 (The Carpet People, 1971). He spent the 1970s and early 1980s working as a local journalist (and later, a press officer for the Central Electricity Generating Board). In the mid-1980s, the first couple of Discworld novels sold well enough for him to ditch his day job and he never looked back. Burrows sifts expertly through information about Pratchett’s professional rise, exploring the nuances of his publishing and distribution deals and his relationships with collaborators such as his long-time illustrators Josh Kirby and Paul Kidby. Some of the business details he uncovers – especially those surrounding TV and film rights – might prove eye-opening for aspiring and experienced authors alike.

Interviews with those who knew Pratchett best, including Neil Gaiman and Robert Rankin, fill out some, but not all, of his personal life. As a seasoned PR flack, Pratchett knew the value of creating a limited public persona and sticking steadfastly to it: his genial ‘Man in Black’ identity served as an effective vehicle for interacting with fans at conventions and in interviews, without giving too much of his true self away. Pratchett crafted his go-to autobiographical spiel as carefully as any book plot, sometimes embellishing the truth for dramatic or comic effect, and Burrows respectfully pinpoints a few of his commonly repeated exaggerations.

Pratchett didn’t need to embellish much. By the end of the 1990s, he was selling almost 900,000 books a year in the UK alone. He’s best known for his long-running Discworld series, but by 2000 he’d also published his collaboration with Neil Gaiman, Good Omens (1990), the Bromeliad (Truckers, Diggers, and Wings) and Johnny Maxwell trilogies, plus various map books, graphic novels, computer games, diaries, calendars, and even a range of 1000-piece jigsaw puzzles based on his work.

While his earlier work was often dismissed as lightweight, thanks to its comic nature and the literary establishment’s disdain for anything “genre”, the new millennium saw Pratchett garner the critical respect he’d always deserved. He was showered with honorary degrees by universities throughout the 2000s, won the Carnegie Medal in 2001 (for The Amazing Maurice and His Educated Rodents), and capped the decade off with a knighthood “for services to literature”. It was clear Sir Terry’s appeal went far beyond genre readers. In the foreword to this biography, Helen O’Hara suggests Pratchett achieved National Treasure status because he “was dependably funny, unfailingly sharp, deeply caring, but often furious as well, and it was the combination of all those elements that made his work sing.”

Pratchett was revered by both fans and publishers for his prolific output, publishing at least one new book every year after 1986’s The Light Fantastic. In another world – one that exists down the opposite trouser-leg to the miserable place we’ve ended up in – he’s publishing still, charming fans at sci-fi and book conventions with his distinctive hat, and sitting atop an ever-expanding IP Universe, which was still growing as recently as last year with Amazon’s TV adaptation of Good Omens. Unfortunately, in this brutal iteration of reality, he made his final exit in 2015, six years after being diagnosed with a rare form of early-onset Alzheimer’s, posterior cortical atrophy (PCA).

The final chapters of this biography, as any Pratchett fan already knows, make for heartbreaking reading. Seeing the words “The Embuggerance” in print – the heading of his public announcement of his diagnosis – hits as hard as it did the first time. Nonetheless, the tears are worth it. The Magic Of Terry Pratchett makes a solid addition to the bulging Discworld bookshelves. As well as outlining his legacy and taking us on a nostalgic trip through Pratchett’s work, it serves as a reminder of why public libraries are so important to children. We can only hope the next Pratchett is out there somewhere, stoking their imagination by reading vociferously and indiscriminately – watched over by a kindly orang-utan librarian. Ook.

Get The Magic of Terry Pratchett at Bookshop or Amazon

Karina Wilson is a British writer based in Los Angeles. As a screenwriter and story consultant she tends to specialize in horror movies and romcoms (it's all genre, right?) but has also made her mark on countless, diverse feature films over the past decade, from indies to the A-list. She is currently polishing off her first novel, Exeme, and you can read more about that endeavor here .

Bookshots: 'The Queen of the Tearling' by Erika Johansen

LURID: Moral Panic in Poetry — A Quilt for David

LURID: May Gray — In A Lonely Place

LURID: Stalker Lit and "You"

Hello, my name is Ali Syed. I got scammed

Immediately, I contacted ULTIMATE HACKER JERRY & I trusted him because his reviews were from our local guild WILDER NEWTON. & within 4 hours of contacting him, I got all my funds back with an ROI. It was unbelievable. I must state, I had to send out my review also. He's indeed recommendable.

Contact Dr Ozigidon if you have been trying to conceive, I never thought I'd be writing this message but after 5 years of infertility and nearly lost my marriage due to not being able to have a child after suffering from PCOS and my TUBES ARE TIED, and severe endometriosis and scanning, I was told that IVF was the only option. This was something we could not afford and had almost given up hope of becoming a parent. A friend of mine recommended Dr Ozigidon to me and persuaded me to contact him, I finally contacted him and he made a spiritual breakthrough to get me pregnant with his powerful spell, within 2 weeks I was pregnant (naturally!!!) and my tube was untied as instructed by this powerful sorcerer. Now! I gave birth to healthy twins in February. I am writing this testimony for those women who are facing the same challenges or even more, depressed with no light at the end of the tunnel. Give Dr Ozigidon a try to help you solve your problem, and hopefully you'll have the same success that I have had. His email address (drozigidonhnez.spell.net@gmail.com) . Call or Whats-App him +2349054750112. I wish you all happiness in your marriages.